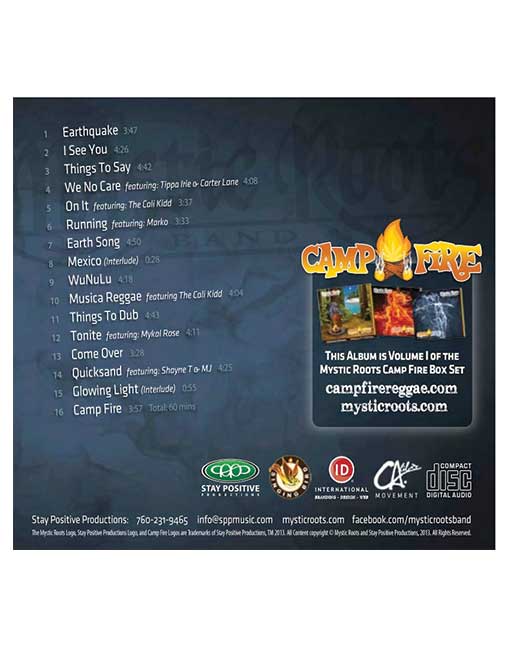 “Camp Fire” is a double album: CAMP & FIRE. Volume One, Camp, features 14 new songs highlighting what loyal fans all over the world have come to love about a live MRB show. Katherine Ramirez, formerly of American Idol, truly shines on this album with her enchanting melodies and songwriting. Joining her, original founding member, cootdog, adds in his “mystic” flavor with socially aware, clever, and positive lyrics. These two vocalists are reinforced with the band’s energetic and powerful combination of bass, drums, guitar, keys, and a full horn section. Featured appearances on the album include Grammy Award winners Mykal Rose of Black Uhuru and Tippa Irie, plus MRB family: Marko, The Cali Kidd, Shayne T, MJ, Carter Lane, and even a surprise appearance by C-Money of Slightly Stoopid on trumpet. The themes of the songs touch on all of the classic Mystic Roots history, ranging from positive messages of inspiration to love songs, celebration of natural herbs and life, and of course, the constant struggles. Tracks include: I See You, Things To Say, We No Care, WuNuLu, Earth Song (a tribute to Michael Jackson), On It (MRB’s rendition of a Bay Area hip-hop anthem), Things To Dub (a dubwise track akin to the greats of Studio One & Easy Star), and many more.